Idiopathic pulmonary fibrosis (IPF) is a chronic fibroproliferative pulmonary disorder for which there are currently no treatments. Although the etiology of IPF is unknown, dysregulated TGF-β signaling has been implicated in its pathogenesis. Recent studies also suggest a central role for abnormal epithelial repair. In this study, we sought to elucidate the function of epithelial TGF-β signaling via TGF-β receptor II (TβRII) and its contribution to fibrosis by generating mice in which TβRII was specifically inactivated in mouse lung epithelium. These mice, which are referred to herein as TβRIINkx2.1-cre mice, were used to determine the impact of TβRII inactivation on (a) embryonic lung morphogenesis in vivo; and (b) the epithelial cell response to TGF-β signaling in vitro and in a bleomycin-induced, TGF-β–mediated mouse model of pulmonary fibrosis. Although postnatally viable with no discernible abnormalities in lung morphogenesis and epithelial cell differentiation, TβRIINkx2.1-cre mice developed emphysema, suggesting a requirement for epithelial TβRII in alveolar homeostasis. Absence of TβRII increased phosphorylation of Smad2 and decreased, but did not entirely block, phosphorylation of Smad3 in response to endogenous/physiologic TGF-β. However, TβRIINkx2.1-cre mice exhibited increased survival and resistance to bleomycin-induced pulmonary fibrosis. To our knowledge, these findings are the first to demonstrate a specific role for TGF-β signaling in the lung epithelium in the pathogenesis of pulmonary fibrosis.

Morphological and real-time PCR analysis of TGF-β targets in β and β lungs. 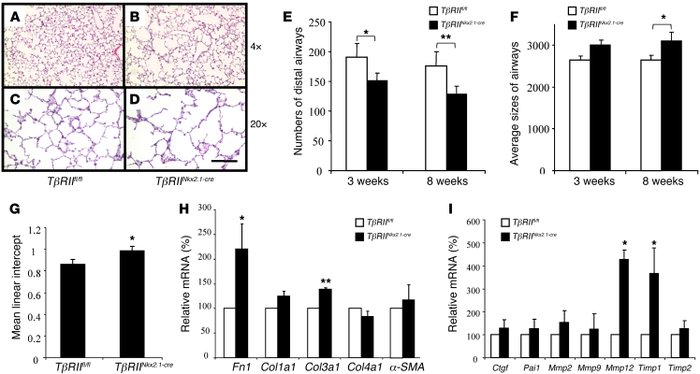