Solute carrier family 1, member 1 (SLC1A1; also known as EAAT3 and EAAC1) is the major epithelial transporter of glutamate and aspartate in the kidneys and intestines of rodents. Within the brain, SLC1A1 serves as the predominant neuronal glutamate transporter and buffers the synaptic release of the excitatory neurotransmitter glutamate within the interneuronal synaptic cleft. Recent studies have also revealed that polymorphisms in SLC1A1 are associated with obsessive-compulsive disorder (OCD) in early-onset patient cohorts. Here we report that SLC1A1 mutations leading to substitution of arginine to tryptophan at position 445 (R445W) and deletion of isoleucine at position 395 (I395del) cause human dicarboxylic aminoaciduria, an autosomal recessive disorder of urinary glutamate and aspartate transport that can be associated with mental retardation. These mutations of conserved residues impeded or abrogated glutamate and cysteine transport by SLC1A1 and led to near-absent surface expression in a canine kidney cell line. These findings provide evidence that SLC1A1 is the major renal transporter of glutamate and aspartate in humans and implicate SLC1A1 in the pathogenesis of some neurological disorders.

Mutations in SLC1A1 from subjects with DA affect its function. 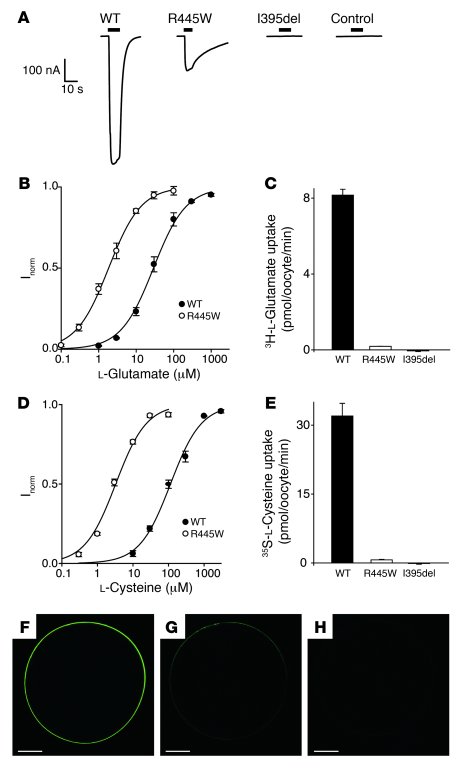