Hypoxic pulmonary vasoconstriction (HPV) is a physiological mechanism by which pulmonary arteries constrict in hypoxic lung areas in order to redirect blood flow to areas with greater oxygen supply. Both oxygen sensing and the contractile response are thought to be intrinsic to pulmonary arterial smooth muscle cells. Here we speculated that the ideal site for oxygen sensing might instead be at the alveolocapillary level, with subsequent retrograde propagation to upstream arterioles via connexin 40 (Cx40) endothelial gap junctions. HPV was largely attenuated by Cx40-specific and nonspecific gap junction uncouplers in the lungs of wild-type mice and in lungs from mice lacking Cx40 (Cx40–/–). In vivo, hypoxemia was more severe in Cx40–/– mice than in wild-type mice. Real-time fluorescence imaging revealed that hypoxia caused endothelial membrane depolarization in alveolar capillaries that propagated to upstream arterioles in wild-type, but not Cx40–/–, mice. Transformation of endothelial depolarization into vasoconstriction involved endothelial voltage-dependent α1G subtype Ca2+ channels, cytosolic phospholipase A2, and epoxyeicosatrienoic acids. Based on these data, we propose that HPV originates at the alveolocapillary level, from which the hypoxic signal is propagated as endothelial membrane depolarization to upstream arterioles in a Cx40-dependent manner.

Expression of Cx40 in pulmonary microvessels. 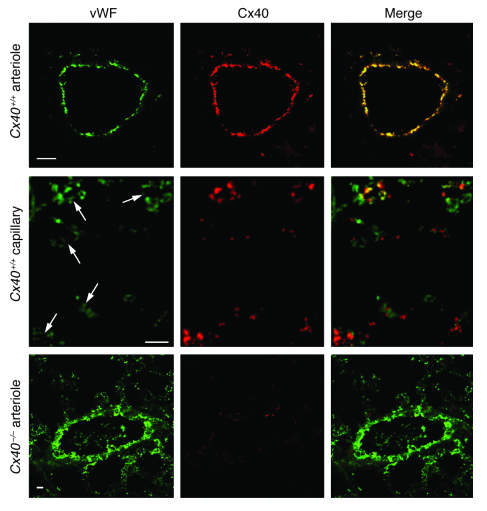