Radiotherapy is an effective treatment strategy for cancer, but a significant proportion of patients experience radiation-induced toxicity due to damage to normal tissue in the irradiation field. The use of chemical or biological approaches aimed at reducing or preventing normal tissue toxicity induced by radiotherapy is a long-held goal. Hypoxia-inducible factors (HIFs) regulate the production of factors that may protect several cellular compartments affected by radiation-induced toxicity. Pharmacological inhibitors of prolyl hydroxylase domain–containing enzymes (PHDs), which result in stabilization of HIFs, have recently been proposed as a new class of radioprotectors. In this review, radiation-induced toxicity in the gastrointestinal (GI) tract and the main cellular compartments studied in this context will be discussed. The effects of PHD inhibition on GI radioprotection will be described in detail.

PHD inhibition induces responses that may result in normal tissue radioprotection in the GI tract. 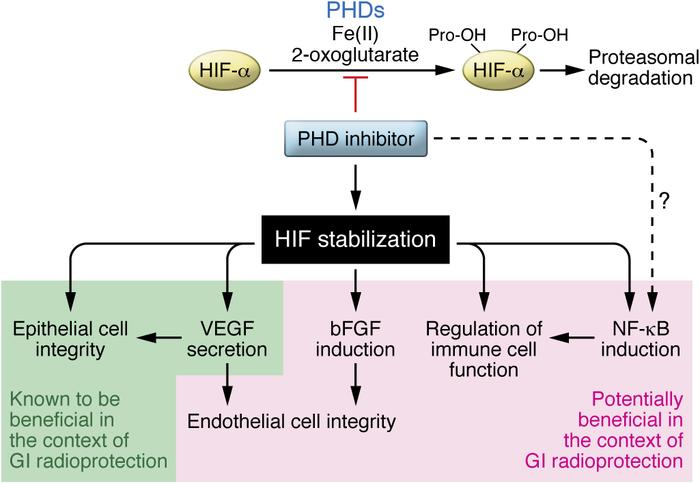 PHD inhibition will result in HIF-α stabilization due to decreased HIF hydroxylation and consequently less degradation (, ). Once stabilized, HIF-α can mediate gene expression changes that can contribute to maintaining epithelial barrier integrity following irradiation (). Protective effects of PHD inhibitors also appear to be dependent on HIF-2α–induced increases in VEGF expression, which correlate with increased microvasculature (). HIF-α stabilization can also result in bFGF induction, regulation of immune cell function, and NF-κB activation (, , ). These effects are represented by solid arrows. The NF-κB inducer, IKKβ, has a conserved PHD1 hydroxylation site, suggesting that NF-κB can also be regulated by PHD inhibition (). Dotted arrow and pink background represent those effects that would be predicted to be mediated by either HIF-α stabilization or directly as a result of PHD inhibition and could result in radioprotection against radiation-induced GI toxicity. These effects have not been formally shown to occur in the context of radioprotection to date. Effects within the green background have been shown to contribute to protection against radiation-induced GI toxicity.