Mast cells (MCs) are present in various tissues and are responsible for initiating many of the early inflammatory responses to extrinsic challenges. Recent studies have demonstrated that MCs can tailor their responses, depending on the stimulus encountered and the tissue in which they are stimulated. In this issue of the , Gaudenzio and colleagues examine the mechanistic differences between MC responses observed after engagement of Fcε receptor I and those seen after MC stimulation via the recently identified G protein–coupled receptor MRGPRX2. By showing that discrete cellular activation patterns affect the phenotype of the MC response in vivo and in vitro, the authors provide important information about how MCs differentially process various stimuli into distinct degranulation programs. 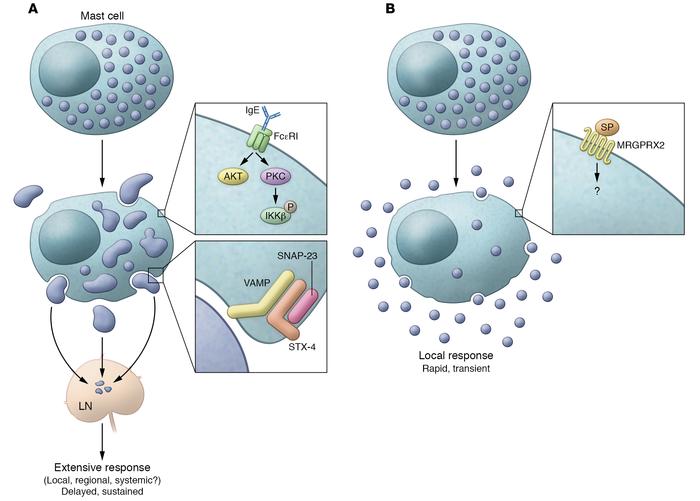 Mast cells (MCs) launch very specific response programs depending on the nature of the stimulus. In this issue, Gaudenzio and colleagues show that MC degranulation is mediated by at least two distinct pathways. () Engagement of FcεRI results in substantial release of proinflammatory mediators. Degranulation is relatively delayed and occurs after granule fusion into large, irregularly shaped granules. Because of their large size, effectors within these granules are slowly released and thereby can mediate immune responses at sites distant from the original site of MC degranulation, such as in regional lymph nodes. The sustained release is associated with AKT and PKC activation, phosphorylation of IKK-β, and the formation of SNAP23-STX4 complexes, which mediate granule exocytosis. () Engagement of the recently identified GPCR MRGPRX2 by its ligand substance P (SP) does not lead to a notable release of inflammatory mediators. Degranulation here occurs as a rapid but transient release of small, spherical granules, which appear to be relatively unstable and do not seem to carry their cargo to regional lymph nodes.